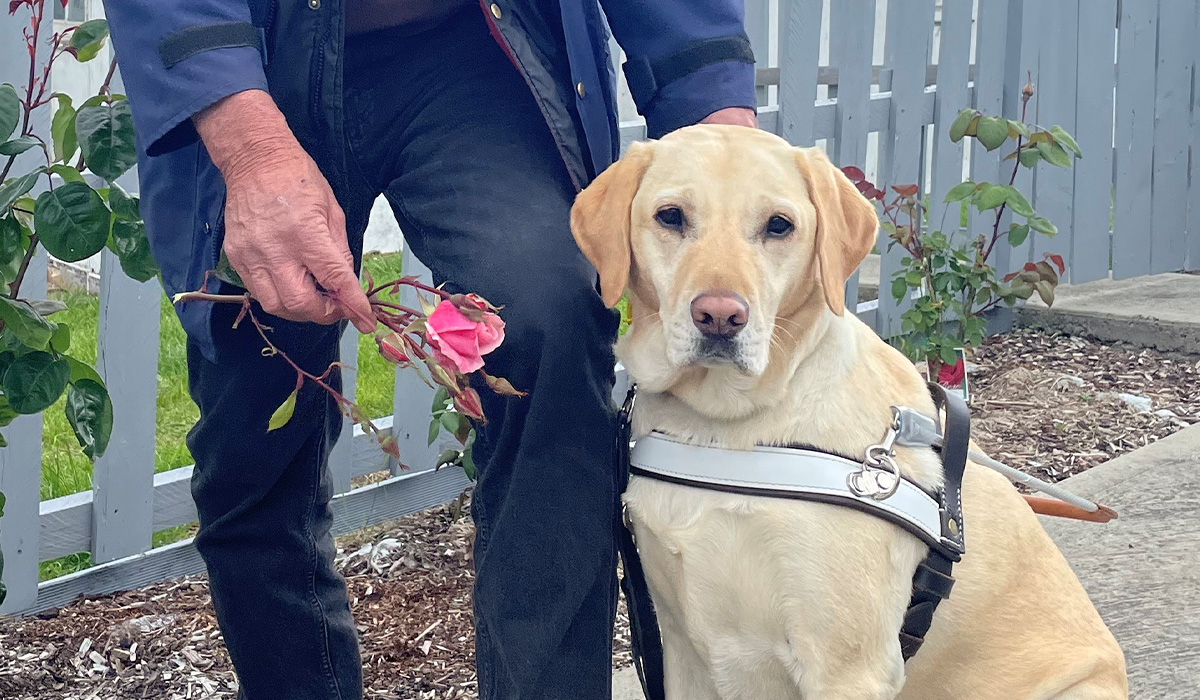 They’ve only been together for about four months, but even in that time, Guide Dog Harmony has changed Ian’s life.

Ian Preston’s vision deteriorated significantly four and a half years ago, due to a condition he’d been born with. “It got to the point where I decided I’d better not be farming and playing with cattle and chainsaws any more. I had to establish a new life, so I walked away from the farm,” he says.

Ian, of Dover, says having low vision is “very tough.” But the aptly-named Harmony has brought a sense of structure, renewed energy and possibility to his life. “One of the things Guide Dogs do is stabilise your emotions and your mental approach to things – your ability to pick happy over sad or depressed,” he says.

“It’s that little pair of black eyes nudging you under the doona in the morning, as if to say ‘let me out, boss,’” he laughs. “It’s that reminder that someone’s here – so I get straight up. Before, I could sleep in til 10.30 because there was nothing to do. You think, ‘I can’t read a book, I can’t this, I can’t that’ … but now the ‘I can’ts’ have floated away.”

In fact, Harmony’s can-do influence was felt even before she arrived at Ian’s home. Knowing he needed to fence his property to keep her safe, Ian decided to try the job himself. He had the tools and the skills, but had never attempted such a big job with so little vision.

Bit by bit – and with the help of friends and neighbours on the trickier parts – Ian fenced his 1000 square metre block. “That was the most fun I’d had in two years, because it was the most motivated I’d been,” he says.

Harmony is passionate about the beach, and has plenty of doggy mates that she loves to play with. Having lived there for about 30 years, Ian is very familiar with Dover, but says: “Harmony is getting me to go to places I wouldn’t normally have gone because I’m trying to entertain her, which is entertaining me more as well. It’s also enhanced my physical health – I go out more, I move faster. I’m not as scared of having falls or tripping over things.”

And as he and Harmony spend more time getting to know and trust each other, life is looking rosier every day.