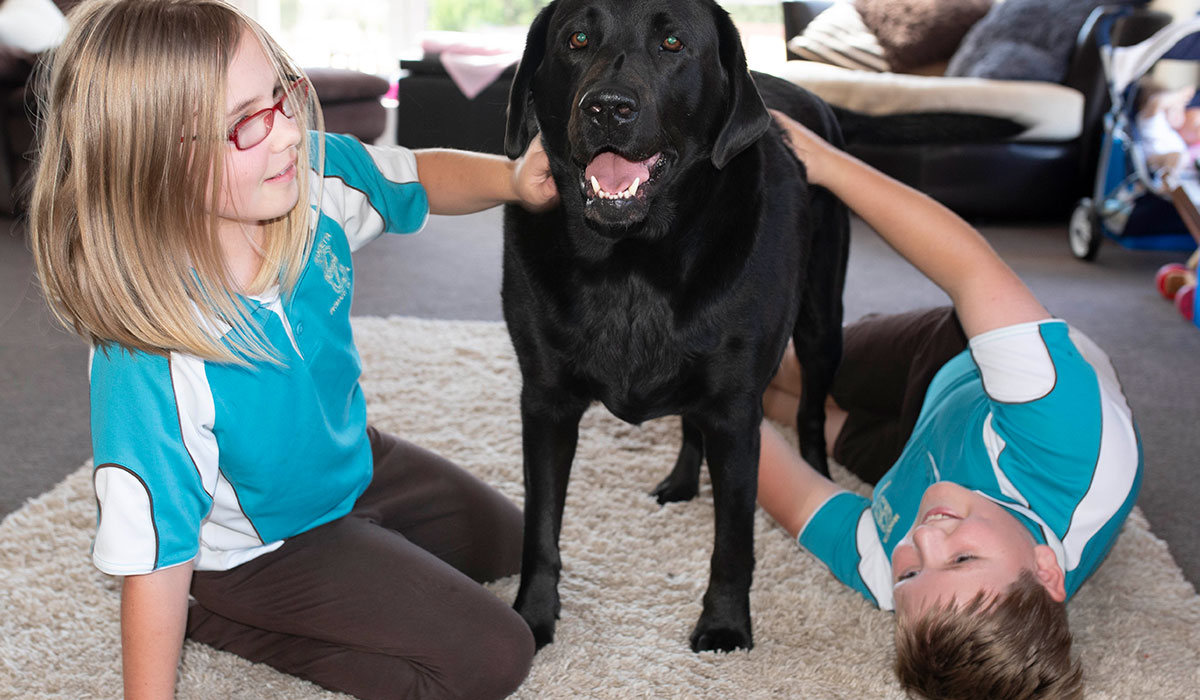 Max was having up to three very physical meltdowns a week.

“There would be yelling and screaming… His arms would be going everywhere and he’d be on the ground, bashing his head into the floor. It got to the point where I just didn’t know what else to do.”

Thankfully, things have changed dramatically in the last three years, and Max has had a total of four meltdowns. That’s it.

And it’s all because of a beautiful black Labrador named Riley.

“Riley has been phenomenal for Max. There is no way a human could have made the same difference that Riley has. He’s literally changed our world.”

The signs were obvious from the start. Max wasn’t developing the same as other kids his age. At two-and-a-half, he could only say a few words.

Struggling to express his feelings, Max’s angst would build up, and up, until he couldn’t control himself…

It was heartbreaking for Melanie to watch. Her little boy was struggling, simply because he was different.

But why was Max so different?

A year later, the answer came… Max was diagnosed with autism.

Melanie now knew why he was behaving the way he was, but it didn’t make it any easier for her to cope with the constant meltdowns he was having.

“By the time I eventually fought with Max to get him to bed each night, I still had to do the dishes, get the kids’ stuff ready for school, and then do my own work. I was getting to bed at one or two in the morning, and then getting up at five to start it all again.”

“It got to the point where I knew I couldn’t do this on my own anymore. I needed help.”

Melanie had tried everything she could think of to help Max. All the services out there for kids with autism just didn’t seem to work. She was getting desperate.

But through Max’s school, Melanie came across ‘Story Dogs’ – beautiful, calm dogs that are used in classrooms to help children who are struggling to read.

The more she looked into them, Melanie wondered, ‘What if Max had his very own dog?’

So in 2016, on the off-chance they would have a dog suitable for Max’s needs, Melanie contacted Guide Dogs Tasmania. She was told that it could take a year, or more, for the right dog to come along.

Melanie was prepared to wait… but the waiting didn’t last long.

Just a few months later a visit was organised for Max to meet Riley, a gorgeous black Labrador who had been through training at Guide Dogs Tasmania.

Unfortunately, Riley was unable to become a Guide Dog. A skin condition that required ongoing treatment made him unsuitable for someone with a vision impairment.

But his extensive training had given him a wonderful temperament, making him a possible candidate to help a child just like Max.

Waiting for Riley to arrive that day, Melanie was excited but didn’t want to get her hopes up, or Max’s…

“Riley is just visiting,” she told him.

But Riley didn’t leave that night. In fact, he never has.

“As soon as Max saw Riley, he was down on his knees with his arms wrapped around his neck. Coming from the kid who’d hid from any dog he’d ever met, this was amazing.”

It didn’t take long for Max and Riley to become best mates. For Max, it was the first he’d ever had…

“Max has always struggled to make friends, but having Riley means having someone that is 100 per cent always going to love you, and always going to believe in you. In Riley’s eye’s, Max has never done anything stupid.”

What continues to amaze Melanie the most is the way that Riley can sense a meltdown coming on in Max – and stop them from happening all together.

A change of tone in Max’s voice… a sense of urgency… and Riley will be there.

“Sometimes, he’ll just give Max a little nudge as if to say, ‘I’m here, it’s OK’. Other times, he’ll push up against him, or literally lay on top of him like a big weighted blanket.”

Max’s meltdowns haven’t stopped completely, but they have slowed dramatically. By the end of the first month of having Riley, Melanie had to pinch herself when she realised that Max hadn’t had even one.

At first, she put this down to the novelty of a new dog in the house. But it didn’t take her long to realise that Riley wasn’t just a novelty to distract Max. Riley is the focal point that Max has always needed.

“Because Max could never explain what the problem was, I could never fix it. I never knew what was going to set him off, so getting him to focus on something else was impossible. But Riley has become that thing.”

When Melanie looks back on what life was like before Riley came along, there are no similarities. Some days, she even questions Max’s diagnoses, because things are that much better.

And while there are still some things that Max can’t do that other kids his age can, Melanie says that compared to where they were just a few years ago… “It’s a walk in the park.”

“Riley is such a beautiful, placid creature, and it’s catching. He really does have a contagious personality. We couldn’t imagine life without him.”